So, finally I got my wish...that there would be a Vancouver, B.C. temple built. Being born and raised there I just always thought Vancouver should have a temple. And here it is! I think it is so pretty. I need to get out there and see it sometime. 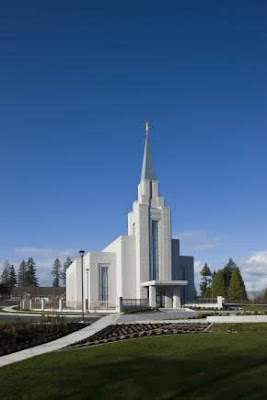 The public open house is from April 9-24th. I hope my aunt's sister and her husband take advantage of this. They aren't members and I think it is an amazing chance to be able to take a tour before it is dedicated. The dedication is Sunday, May 2. So, if you are in the area at that time...
Latter-day Saint temples differ from the meetinghouses or chapels where members meet for Sunday worship services. Temples are considered “houses of the Lord” where Christ’s teachings are reaffirmed through marriage, baptism and other ordinances that unite families for eternity. In the temple, Church members learn more about the purpose of life and make covenants to follow Jesus Christ and serve their fellow man.
The Vancouver British Columbia Temple is the 131st temple of the Church worldwide and the seventh temple in Canada. Other Canadian temples include Cardston Alberta (dedicated 1923), Toronto Ontario (1990), Halifax Nova Scotia (1999), Regina Saskatchewan (1999), Edmonton Alberta (1999) and Montréal Québec (2000). An eighth Canadian temple to be built in Calgary, Alberta, was announced in October 2008.

I love temples and the amazing work that is done in them. I am thankful that I get to be a temple worker. It is a great foundation in my life. I am very blessed.

P.S. I have wonderful nieces and nephews. All of them! My sister Tracey's two oldest boys were over at my mom's last night. They are just such good kids. And they are even both teenagers! 13 and 15. Just sweet boys. I really am lucky. Their cousin who is 13 is a great kid too. Just good boys. It's so fun hanging out with them. (This 13 year old just got baptized last week and the missionaries stopped by last night to show him the film "The Restoration"...the story of Joseph Smith. We invited Zach and Elijah to watch it too. I hope it touched their hearts.)

Oh, it's so beautiful! :) Surprisingly, even though I grew up in the NW, I have never ventured up to Vancouver. Aaron & I are planning a trip there this summer, however. :)

Thanks for all the fun info, Lori! Have a great day!

That is pretty! Maybe someday I'll get to go to Vancouver. Would you be my tour guide? :-)

It's funny because when the Prophet mentioned the Vancouver temple during the session we went too I immediately thought of you. Wow, you really own it!

Gorgeous! And so cool about it being in the area of your roots. I want to hear all about it when you go see it.

Lori, that is so awesome! You will definitely have to make a trip of it.
And your nieces and nephews are so lucky to have you as their aunt. I hope they know so:)