Only 2 Days...and what a great evening!

'Til the Vancouver Olympics start! I LOVE the Olympics. No matter where they are hosted. But being that I was born and raised in Vancouver, B.C., it holds an extra special place in my heart this time. I am so excited!
The whole thing about the Olympics that is so cool to me is that these athletes work so hard and all alone at times. For no fame for so many hours of hard work. And lots of sacrifice. Yes there are those athletes who are really well known and they are amazing...but think of all the hundreds of athletes who don't get that fame but work just as hard. They put their heart and soul into it. It amazes me. And not to mention that the whole world is pretty much represented as they all come together. I LOVE THE OLYMPICS! Good luck to all the athletes! And let the games begin! 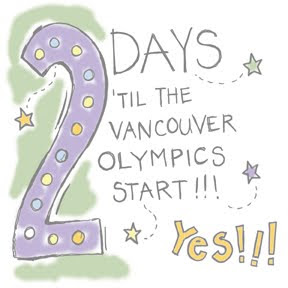 And I got to go to an amazing Stake Relief Society Conference last night. The theme was "A Perfect Brightness of Hope". First our stake president spoke. So good. He talked about how a lot of people get distracted and don't recognize perfect hope...which is through our Savior. And that we need the light of Christ. He used the example of the little boy in Haiti who had to wait quite a few hours to be freed and sang Primary songs in the dark to comfort himself.
Sandra Rogers (who used to be in my ward and is VP of International Relations at BYU and amazing!) spoke with Nora Nylund (in our ward too and is stake RS pres). Sandi spoke the most but they talked about hopes. Transitory (wishes) and eternal hopes. She talked about WWII and how the women of Germany in the church persevered even with all that was going on. They kept going strong with their testimony of hope. The wind and waves of life come to all of us but eventually if we stay strong and have faith that we will eventually get to the promised land - the Lord. Hope and faith give us the power to choose obedience. We get tested with spiritual obedience. The happiest people are those who love thy neighbors as thyself. Each experience we have in our lives can be a redemptive experience. The Lord won't forget us. He loves us.
Then Shane and Tracy Warby (former members of the Mormon Tabernacle Choir and also used to be in our ward) sang about 6 songs. So amazing. A great testimony through music.
Then Lloyd K Newell... Wow! What an amazing and gentle man. He told us that of course he does not get paid to do Music and the Spoken Word each Sunday. It is his calling. He told us that President Monson told him that he is not getting released anytime soon. He has been doing it for 21 years now. As he spoke to us he told us that his father went to work 24 years ago and never came back. Not sure if he was killed in a car accident. But Bro. Newell had to stop speaking for a few minutes. He got choked up. He told us that he still misses his father. And then he told us that his mother had surgery 23 years ago and has never been able to walk since. But that she doesn't let that stop her. He told us that he had to clear his calendar to make sure that he came to our stake because his father grew up really close to our stake center. Plus he has two aunts who live in our stake. He told us that his mother still holds onto hope even through her trials. He said to us "We're all in this together". (Sounds like High School Musical) And that we all go through trials in life. That we need each other. We've all had heartache. We all hold onto faith and hope. With faith, comes hope, comes charity. Kindness is always called for because you don't know what others are going through. We need to continue constantly in prayer. We need to live a life of decency, honor, and goodness.
He also added that we could all pretend that we had inspiration as to what Music and the Spoken Word would be about the next two weeks. Pretty funny. But I will share. Next week it is on love. And the poetry of Elizabeth Barret Browning. And on the 21st it is on the untold Olympic stories. He was told by President Hinckley that he needed to convey a spiritual gem each sunday. He said that he hopes he does that.
Truly an amazing evening. My heart was touched.
Posted by Lori at Wednesday, February 10, 2010

Wow, that sounds like a fantastic meeting!! And all those names bring back such great memories of that ward.

Have fun watching the Olympics! I'll get in what I can, and I'll think of you.

WOW!! That does sound amazing. Such great people - I miss them. I didn't realize the Warbys weren't in the choir (or the ward) anymore. I still remember the first Sunday they sang in church and I just wanted them to take over the meeting. I'm hoping she's still at AFHS when my kids get there!! And Sandi - I love Sandi so much! I'm sure it was great to hear from her too.

I forgot about your Vancouver connection! Yay! And Yay Olympics!

I am so tempted go to one of the events at the Olympics being that we only live 2 hours away from it. Would be fun but will see. I hope we get up to Vancouver before we leave Seattle. We only have 4 years! :0)