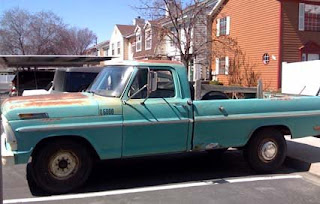 So a friend came by to trim my peach tree branches on Saturday and I just had to snap a photo of his Dad's truck which he used to transport the tall ladder. This wonderful turquoise truck is a sweet reminder of a kind friend of my parents. My friend Kevin's father used to be my mom's hometeacher and he passed away at least two years ago. John McCoy was always driving around my mom's neighborhood in this truck doing good for his neighbors. It is an icon of goodness. That truck always makes me smile. I hope the McCoy family has it forever.
Posted by Lori at Sunday, March 29, 2009 5 comments:

A Little Snippet to add to the Name Thing...

Good friends of mine have a little 5 year old boy (John) who calls me Lori Sumes. Yes- apparently I am plural in some way or another. He has called me that for the last 3 years or so. I guess he will figure it out some day that I am as singular as they come ; ) but it just makes me smile when he calls me that.
Posted by Lori at Thursday, March 26, 2009 3 comments:

What's In A Name?

I am so lucky to be an aunt. Good thing my siblings and friends have had kids... because little children are the sweetest thing in the world to me.
I was thinking the other day of some of the ways my nephews/nieces have said and now say my name. You wouldn't think the name "Lori" would be that difficult...but it apparently is. And it has brought me lots of laughs. Here are a few I can remember offhand...
Orla
Loey
Roli
Yoey
Groli
...and the latest two versions that are happening right now (drum roll):
Glori and Nori
My youngest nephew, who is the independent age of 2, said to me the other day (he can be very polite), "Enqu, Nori"  (Translation: Thank you, Lori)
Honestly, these little children can melt my heart. Yes, I know it is not easy being a parent, but the role of being an aunt is pretty sweet at times.
Oh, and since I am thinking of different ways to say my name...I must add an odd way of writing my name courtesy of a previous bank I had my money in at one time. They would send me paper statements in the mail and I probably belonged to this bank for at least 10 years so it isn't like they didn't have records on me. One time, and only one time because I called them afterwards and got it straightened out, I got my paper statement and the name on the front was "Lota" Sume. Okay.... The really funny thing about this, other than I felt like I was an oldtime cartoon character with that name change, is that a couple of friends still call me this after I told the story to a number of friends. It is kind of bizarre how much a bank could mess up my first name on my statement. I figure they were compensating for my last name. And that brings up another subject. 9 times out of 10, when I meet new people or start a new job and they see my name on paper, they think my name is pronounced "Sumie" and they also think I am Asian once in a while. Blond hair, blue eyes...hmmmm. Given that I have grown up with my name (which is Finnish by the way and I understand it is not a common name by any stretch), I have always known the proper way to pronounce it. The "e" making the sound long. So instead of "Sum", it is pronounced, "Soom". I guess what I get confused about is why people pronounce it like it has an "ie" on the end or a "y" on the end. Time and time again I suggest they remember a name like,"White". Do we say, "Whitey"? Well maybe some people do... That is okay. People mean well and I am sooooo used to it. I love my last name and at the rate I am going, I might always have it as my last name. Which is fine with me because, if a person can or should, I love my name and am proud of my heritage. So I will just carry on... (smile). I guess I should be glad that when Dad came to Canada from Finland, with his parents, that they changed our last name from Sumu to Sume...though I guess Sumu would have been easier to pronounce...though Sumu conjures up images of large overweight asian guys who get into a ring and knock each other out with their oversized abdomens...
FYI: My first name means "Winner" in scandinavian and my last name means "Little Fog". I am tagging all of you to figure out what your names mean. And just to reiiterate, I love my name and I have to say it is entertaining as I meet new people to see what comes out of their mouths.
Posted by Lori at Tuesday, March 24, 2009 6 comments:

All I Want For Christmas Is My Two Front Teeth... 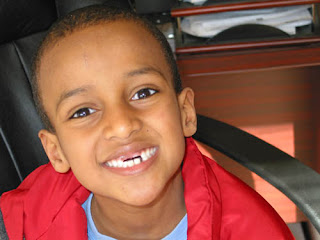 My cute nephew now has his two front teeth missing. He is a sweetie!
Posted by Lori at Monday, March 09, 2009 6 comments:

Yes, that is what my two year old nephew Wy-Wy asked me as my mom and I were leaving my sister's family's home on Sunday, after enjoying a wonderful dinner there.
You wonder what that means? Well, my sister's husband Alan sometimes forgets his cellphone and keys for work... you got it..."keezabone" means "keys and phone".  So when I said to everyone that it was time to go home...or leave Wy-Wy's house, naturally he had to ask, "Keezabone?".
Posted by Lori at Tuesday, March 03, 2009 4 comments: