Just getting some stuff done around the house

Just got my livingroom/dining room, halls, and two sets of stairs cleaned professionally. So happy! Tomorrow a carpet stretcher guy is coming cuz my carpet in my living room is a little stretched in a couple of places... or I guess I should say it needs to be stretched and smoothed out. So exciting.
Next is to replace my two upstairs windows that have some moisture in them. Not sure when I will do that.
Now to get busy scanning photos for my sister's father-in-law's personal history. Just working on stuff here and there.
Woohoo!
Oh, I guess I need to eat lunch. Hungry!!!
Posted by Lori at Friday, July 31, 2009 1 comment:

So here is another birthday card that I made for a co-worker. 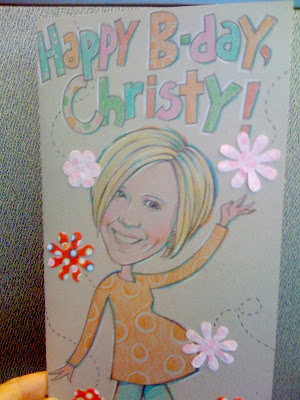 Saw this today...as I was looking for ideas

Daisy, daisy, give me your answer true... 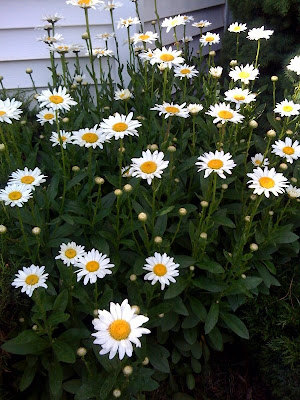 Daisy, daisy, give me your answer true...I'm half crazy over the love of you... (I think that is how that old-time song goes...)
Anyway, I do love daisies! And here are some that I planted about 5 years ago. They are standing tall and growing strong. They stand about 3 1/2 feet tall now. Woohoo! They are just happy and bright...but strictly just for show since they don't have a fragrance. Ah well. I will forgive them and just enjoy them.
Posted by Lori at Sunday, July 12, 2009 6 comments:

So my littlest nephew Wyatt who just turned 3 (that I write a lot about...since I see him so much along with his mom who is my sister Karen and her husband Alan and their two other sons Ben and Ander) was talking to his mom (Karen) today while she was giving him a bath and as you read this...just remember this conversation was totally out of the blue...
Wyatt: You sad, Mommy?
Karen: I'm okay, Wyatt.
Wyatt: You sad about Jason?
Karen: I am okay, Wyatt. I get sad about Jason and I miss him a lot, but I am doing okay.
Wyatt: Jason happy, Mom. Jason happy. Jason happy. Jason happy.
(Wyatt just kept repeating to his mom that Jason is happy...probably about 4 times.)
To me and my family, that conversation between Wy and his Mom means the world. When Karen called and told me what Wyatt had said to her, I just couldn't help feeling how thin the veil is to sweet, little, innocent children on this earth. I KNOW that Wy has seen Jason since he passed on. No question. And more than a few times...just from how Wy-Wy has acted and talked about Jason these past 3 months. And for him to want to share with his mom that Jason is okay just brought tears to my eyes and reminds me of how close Wy is to Jason and what he is doing. For Wy to share that with his mom just was the sweetest thing and touched my heart so profoundly. We miss our Jason terribly at times...but through the words and thoughts of a little 3 year old, we are reminded that Jason is okay. It was a sweet and touching conversation.
Posted by Lori at Wednesday, July 08, 2009 6 comments:

A drawing I did yesterday...

Birthday card I did for our Stampin' Up Creative Services Vice President Brent Steele. Ta da! 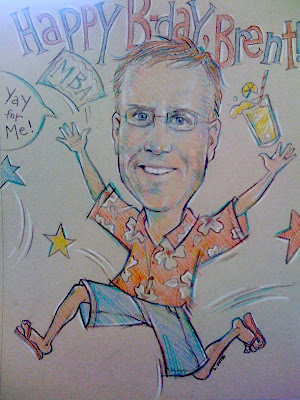 The start of the holiday...a long weekend and fun events on top of it all.
Friday, July 3rd...Here go the balloons...lifting off into the sky. The Provo Balloon Festival is pretty fun! Even though you have to get up really early in the morning. 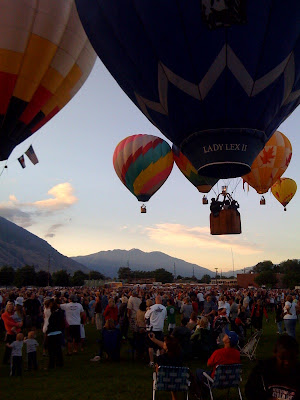 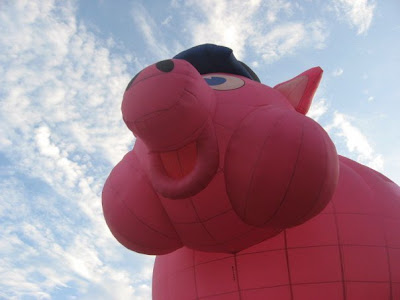 Balloons all over the sky...there were 20 balloons in all. It was great! 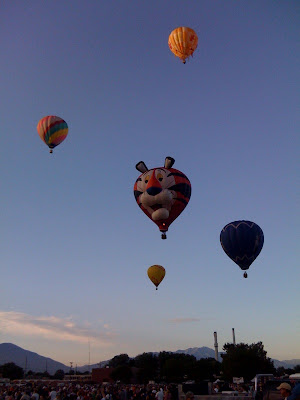 Balloons being fired up... ready to take off. 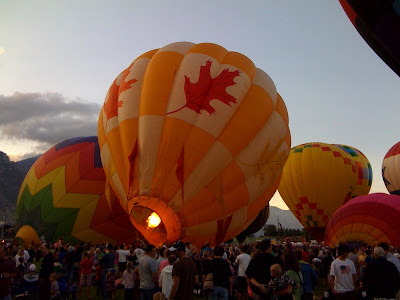 Having fun with my sister Karen and her two oldest boys. We got there at 6:30 in the morning...yawn! But it was great fun! 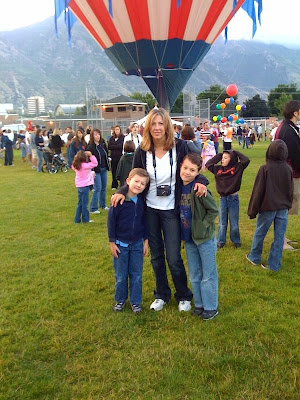 Saturday, July 4th...a breakfast at my sister Karen's house in AF that morning....then lazing around awhile during the day and then...Walking into the Lavell Edwards football stadium in Provo, Utah. I love that stadium! I enjoyed a fun evening there last night. Going to Stadium of Fire with friends. My sister Karen and her family went and so did my brother Gary and his family. We were all sitting in different areas of the stadium but we contacted each other by texting and phoning. 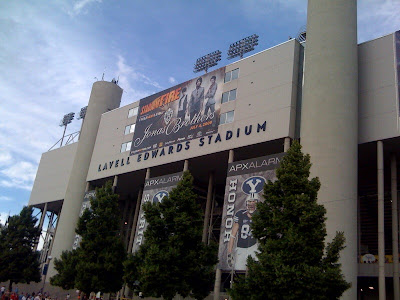 Glenn Beck was in the Cougar Club room at the stadium. We came to see him and hear him speak for a little bit. As he walked out he spoke a little to the crowd and he touched my shoulder and said, "Bless you." I thought that was cool. I appreciate what he is trying to do in his life. Some people don't like him... but all I can say is, "To each their own opinion. That is what makes this country great." 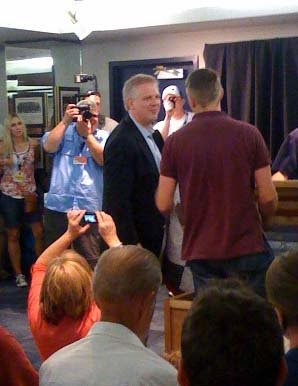 Of course I had to wear my patriotic flip flops... 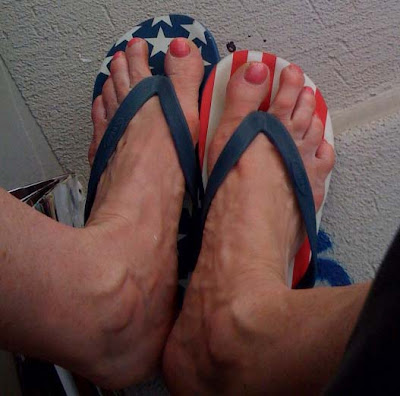 Dusk starting to fall on thewarm summer night in the stadium as the performers entertained the crowd. The Jonas Brothers were the headline of the show...couldn't get any good pictures of them. But it was pretty cute watching a little 7 year old in the row behind us singing along to their songs. She-Daisy performed also. And Glenn Beck was the master of ceremonies. David Osmond (Alan's son) also took part in the program. They also had a flag burning ceremony at the end of the night. It felt very sacred as they went through all the steps to burn it. 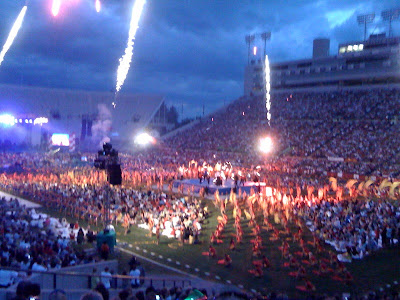 Lots of fun and excitement the whole night through. 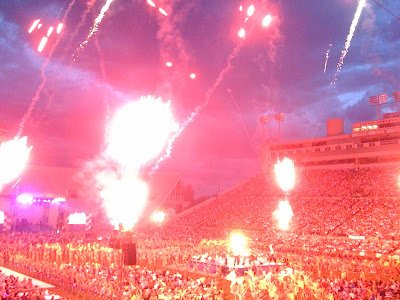 Ah, the fireworks at the Stadium of Fire... bright bursts of color in the night sky... 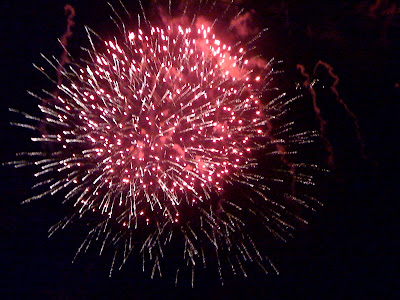 A fun time to celebrate the 4th...patriotic music, smoke from the fireworks, cheering from the crowd... 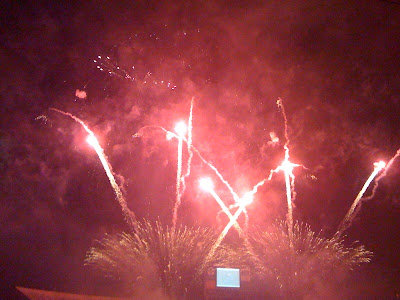 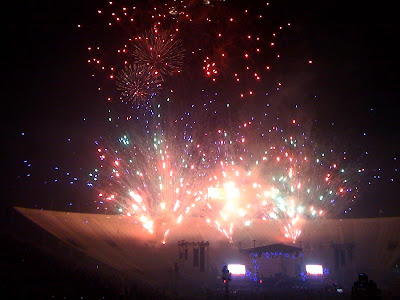 Thank you to all those who serve this country and through their sacrifice, we are a free country. May we always be free...and appreciate that we are VERY blessed.
Posted by Lori at Sunday, July 05, 2009 5 comments: