Plus on Thinking About it...

I really don't need much that I don't already have...except for maybe a house someday with a garage! ; )
Posted by Lori at Sunday, December 28, 2008 1 comment:

A Good Reminder...Give Over Get

So, are there some Christmases where you end up spending a lot more than what you ever receive? I truly don't mind. That is how it pretty much always is.
So a sweet couple in my neighborhood just dropped off a Christmas treat to my door after church today (they finally found me home!). And they also gave me a copy of their Christmas newsletter with a good reminder thought in their message...
You know how at least one or two people (at least) probably ask you the question each year, "What did you GET for Christmas?" Well how about subbing out a word in that sentence to "What did you GIVE for Christmas? I loved that reminder. And no, this isn't the time to rattle off a brag list of all that you might have done or bought for others. That is not the purpose at all. But instead a good reminder that it is always better to give than to receive. Oh I know- it is fun to get presents. I agree. But I think it is a good reminder that, for me, giving is where I get the most deep-down true joy.
Anyway, I am waiting for my (unknown-so far) millionaire husband to come along and lavish many gifts on me...kidding. I am just so funny!
Posted by Lori at Sunday, December 28, 2008 No comments:

The lights you see are only at the side of this house. Around the corner there are a ton more lights but I wanted to try to get a picture of the home. Better to see in person.
Posted by Lori at Friday, December 26, 2008 No comments:

Looking at the Lights So once in a while I go with some friends on Christmas Eve night, after all the presents are wrapped and there is nothing left to do for the morning. We drive around town and look at the lights. This home is on Dry Creek Road. They rent out a radio frequency for the month of December. They set up a ton of lights on their trees and add additional displays. Then people line their cars up on the road and slowly move up to the house and watch the christmas lights turn on and off to the music. It is pretty fun. A ton of work for that family! But just a fun little Christmas tradition. FYI, the home is like an amazing white castle! I think the owners were with Tahitian Noni from the very beginning. Apparently very down to earth people.
Posted by Lori at Friday, December 26, 2008 1 comment:

Just wanted to say that.
I am out of work in 3 hours! Yes! Bring on the festivities of the season!
Posted by Lori at Wednesday, December 24, 2008 2 comments:

Stocking Stuffers I Could Never Afford

So I don't get it...every year it is the same thing where the stores, tv, radio, and newspaper/magazine ads advertise that, for example, an expensive video game would make a great stocking stuffer...or maybe a $300 necklace...or tickets to Hawaii or something like that.
I am not sure who these advertisers are advertising to but I must run around with much less of an income than these people that they are advertising to. I could MAYBE see a single one of these items as a main Christmas present but certainly not as a little last minute stocking stuffer!
Hello! Sounds like I need to get another side job at least to keep up with everyone else?
Posted by Lori at Tuesday, December 23, 2008 5 comments:

So a friend of mine, Erin who I worked with at the temple at who is a fellow blogger, related a store about a glass from a restaurant that she mistakenly walked out with. Funny!
Then it reminded me of my little incident a week ago...
I have one of my brothers for christmas this year. He mentioned he could use a knit hat, gloves, and a scarf. Okay. Sounded pretty simple...
I heard that Old Navy might have just what I wanted to purchase...I drove over- in the snow and cold- and went inside to start my search. In one section of the mens' clothing i found some scarves but not much else. So I grabbed a long black smooth fleecy one. I had almost given up hope in finding a hat or gloves. In another section of the store the items were all there but not coordinating. Rude. Finally I saw some customer trying on a guy's hat and hope came back that I might find a matching hat and gloves. I went to the area and began looking. All of a sudden in my rush, I had no idea where I put that long black scarf I had been clutching. I even stopped to look a couple of times but figured it fell on a shelf in my haste.  I guess I was distracted with being a little aggravated spending so much time looking for what I needed which seemed like such a simple task.  So I finally found a couple of items that didn't coordinate but I just wanted to leave. I paid for my purchases and even talked to the cashier saying how I didn't really find what I was looking for and walked out. (So yes, just a side note-she had time to really notice me and what I was wearing which will make sense in a second.) Back to the story...I figured my brother could return them if he needed to.
Just a few steps out of the store, I wondered why my left shoulder felt a little weighed down and bulky- So I kind of pulled at my jacket...Yes, on my shoulder of my black fleece coat was the scarf I had misplaced. I guess in my haste I had thrown it over my shoulder! Oh great! I had apparently become a shoplifter! I felt like a total doof!
I quickly walked back into the store and deposited the contraband on a display shelf and walked out again. Just odd that no one noticed me leaving with it or returning it either. They need to beef up security around there for us shoplifters!
I walked out kind of embarrassed. (And FYI, I went to Target a day or so later and found all matching and much better priced items for my brother and could actually add on a nice grey sweater for the same amount of money...so I ended up returning the Old Navy items...and that same cashier was there and remembered me...she apparently remembers faces but not that I was sneaking out a long black scarf on my shoulder!)
The only other time I have done something close to this was when I was going to BYU and I was at the bookstore and walked out with a pencil in my hand. I walked right back in and put it down on a shelf..but in that case I was always so used to walking around with a pencil in my hand that it was very natural to me.
So there you go...anyone need shoplifting lessons? Watch out though...I may take something from you...accidentally of course!
Posted by Lori at Thursday, December 18, 2008 6 comments: 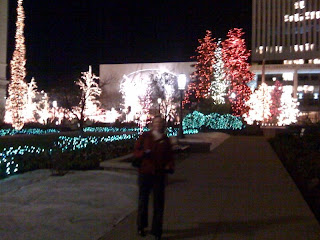 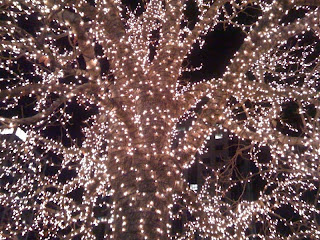 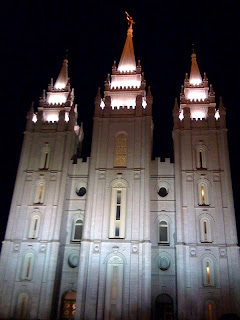 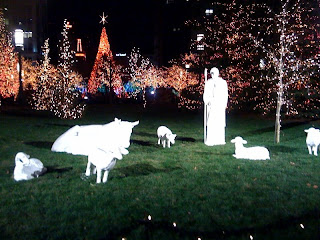 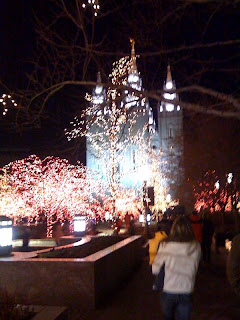 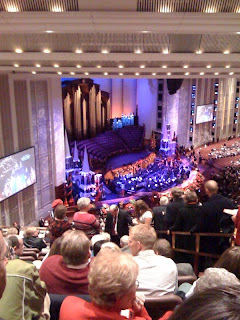 So...at the last minute I got to attend the yearly Christmas Concert at the LDS Conference Center in Salt Lake City. It is a yearly event and it is sometimes very hard to obtain tickets. The Mormon Tabernacle Choir and The Orchestra on Temple Square put this event on. I went with friends on Friday, December 12. It was wonderful. Yes, we were in the nosebleed section but it didn't matter. The true spirit of Christmas really fills my heart when I attend these concerts. I have been able to go the last 4 years. This year we had the soloist Brian Stokes Mitchell (the range on his voice is amazing!) and we had the actor Edward Hermann who was the narrator for a couple of parts. I know him well considering I am an avid fan of Gilmore Girls (a 7 year tv series and yes I saw every episode!). It is a quirky show and I love all the characters in it. Mr. Hermann narrated the story about my favorite Christmas song, "I Heard the Bells on Christmas Day". The song was written by Longfellow and it is a sad story but a sweet one too. The choir and orchestra, of course, put on an amazing performance as always. I also took some photos of where we were sitting and some of the lights on Temple Square. Amazing how the lights are on every square inch of the trees. It is a magical fairyland of lights. You honestly just want to skip around...okay maybe not but I kind of wanted to. Not sure my iphone camera captured it all too well but it is the best I could do. I also love it when the temples are lit up at night. The Salt Lake Temple is so stunning. It was a nice night.
Posted by Lori at Wednesday, December 17, 2008 3 comments:

I just get tired of how some people are treated. Some totally ignored and some totally worshipped. That is all.
For the 2 or 3 of you that probably look at my blog, I apologize for my little outburst. Doesn't change my feelings about the situation but it wasn't the nicest for me to post that.
Posted by Lori at Tuesday, December 09, 2008 14 comments:

On the earlier entry

A Street or a Holiday

...how everyone is equal---or should be...and is just as amazing as the next person, but that once in a while you come upon a situation where the very earth seems to revolve around a single person. And for non-important reasons too. Sometimes you almost expect that eventually a holiday will be named after them or at least a street.  Just a weird occurrence that I have been observing for the last year.
Oh well, maybe that individual needs that attention. I like to hope that is the reason for all of this.
Peoples priorities are interesting to observe for sure. I tend to try to focus on different priorities I guess.
Posted by Lori at Tuesday, December 09, 2008 No comments:

Following a 2 year old around!

One of my nephews turned 7 on Thanksgiving. So he got to have a party last night. This is a photo at Classic Fun Center where I was the busy aunt following the 2 year old brother all around during Ben's party. Yes, nearly the whole night Wy was glued to this car! He is into "Cars" right now so he kept thinking this was Lightening McQueen. He even kissed the car a few times. He wasn't too happy when he ran out of tokens to make the car move. He is sitting in the car with his 6 year old cousin Marcus.
Let me tell you, when Wy wasn't sitting in the car, he was all over that fun center. Pretty quick walker for a 2 year old! And VERY independent. He is a sweetie.
Posted by Lori at Thursday, December 04, 2008 4 comments: