My littlest nephew turned 3 yesterday. Yes, I see him a lot since they live close by.  He loves the movie "Cars", he loves the tv show "Yo Gabba Gabba", and he ADORES the tv show "The Wiggles". A D O R E S the Wiggles!!!
So he got to have a car cake... made by his mom (my sister Karen). And my mom and I came to the party and we each gave him some Yo Gabba Gabba toys. Of which he was thrilled! 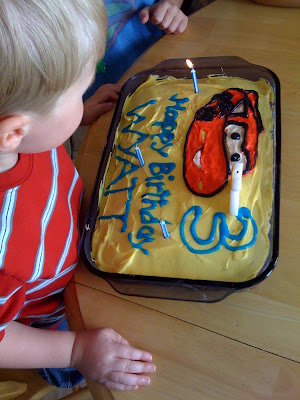 But it is a good thing that he opened the Yo Gabba Gabba toys first... because right after that his two big brothers each gave him two of the Wiggles action figures (yes, I told my brother-in-law we would call them action figures...just for his peace of mind...his sons do not play with dolls!) So here he is below clutching his Wiggles action figures. When he opened the first two, he kind of went into a trance and started walking away with them mumbling, "Wiggles...Wiggles." We had to call him to come back to open the rest of his presents. Pretty cute photo! 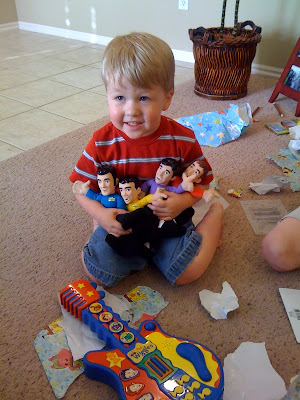 So the picture below kind of gives you an idea of the joy he felt from even one Wiggle action figure...Life is good for the Wy boy! 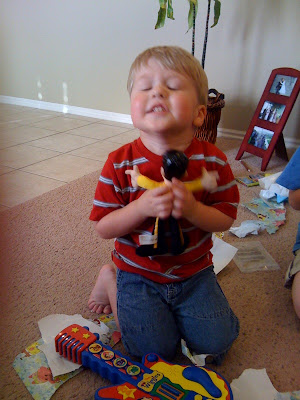 Here he is with his Wiggles guitar that his parents bought him. You can just push a button and one or all of the Wiggles sing one of their songs. Wyatt just kept repeating, "Wiggles guitar." 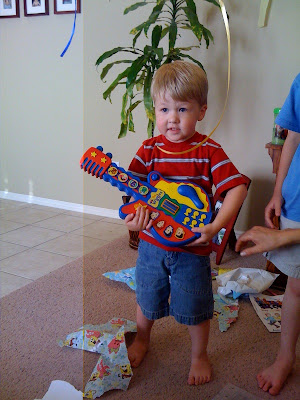 All in all a VERY fun celebration! I still can't help smiling at how excited the little guy was.
Posted by Lori at Tuesday, June 23, 2009

What a cute little nephew, I love those pictures and all the passion he has for those toys :)

So fun! Our boy is turning three soon; I can't wait after seeing these pictures!

He is a CUTIE!! I love birthday parties for nieces and nephews- they are the BEST! And 3 years old? Such a fun age!!

That is awesome, Happy Birthday cutie!

I think he looks like his Aunt Lori. What do you think?

I think he looks like Aunt Lori, too, lucky kid!

Could he be any cuter??!! I love his rosy cheeks and kids' birthdays are just the best!