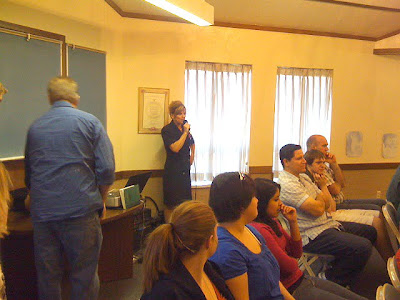 We had a fun activity last night for combined YW/YM…we called it "Flight Night to the Celestial Kingdom". We pretended to be on an airplane (equal rows of chairs across with an aisle in between).
Our activity went well last night. The girl class presidents had to show the exits of the plane and how to place the oxygen mask on one's face. It was great. My friend Lisa Anderson used to be a flight attendant for Delta and she dressed in her uniform and stood in the back of the room and using her microphone made it sound just like you were on a plane…just how the attendants talk over the microphone--kind of echoey. She also put up airplane window-shaped laminated photos with clouds on them so it looked like you could be looking out the windows. She talked about being safe on a plane and obeying the rules just like we need to obey the commandments and follow the safety rules that our prophet asks us. We used the video (an old church video about an indian boy who is talking to a snake and the snake wants him to carry him down the mountain. The boy doesn't want to but finally agrees because the snake says it won't harm the boy. The boy lets the snake down on the ground and the snake bites him. The boy asks why and the snake says that he is a snake…anyway just a reminder to the youth that you need to steer clear of some not so smart choices in life) that we showed to be the free in-flight video. During the video/movie, the class presidents served pretzels and water and rolled the cart, from the kitchen, up and down the aisle. Then they had the activity in the cultural hall where half the kids were blindfolded and walked through a course and were led by the holy ghost's voice, which were the unblindfolded kids, and then there was a loud voice (one of our boys) who was being the evil influence voice trying to shout at them and lead them astray…and then they came back in to the RS room again where our plane was set up and our 2nd counselor in the bishopric talked about how on some flights you have turbulance just like in life and how we need the safety of the gospel. Then the kids all had strawberry shortcake served to them. (Heavenly dessert...get it?) Everyone said it all went great. I was glad. And I didn't have to do much which was extra nice.
Another activity accomplished. Always a good feeling.
Posted by Lori at Thursday, April 28, 2011

Sounds like a fun night. I love the attention to detail (like the windows, snacks from a cart, and in-flight movies). Do your youth know how blessed they are to have great leaders? I hope so! Oh, and I love the snake movie. A great message!