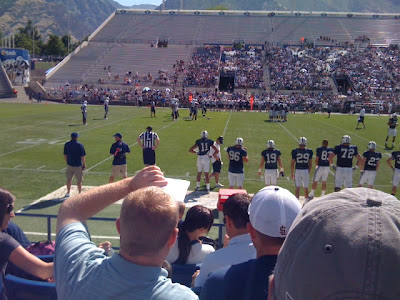 Went to the pre-season BYU Football scrimmage this morning. Great fun but it was SO hot out! Yay for the number 96. A sweet memory to me. Oops- I found out later, that it is against the rules to take photos during the scrimmage. Don't tell!

At Lowes after, I saw a woman(?) that I swear was a guy...trying to be a woman. Long brown hair, a long skirt, but totally angular face. I had to glance (quickly) twice!!! And as she/he walked away, I looked again and she/he had the back shape of a guy. Oddest moment ever! And carrying a purse. Was I being punked? Where was the camera? I thought.

And then at Costco, I saw a friend I haven't seen for a long time! So good to talk to him.

Fun but odd day all mixed together.
Posted by Lori at Saturday, August 13, 2011

Ah, BYU football. We love the Cougars! And that person may very well have been a guy. When I worked there, we had a client come in who was a man, but he had the most beautiful hair and nails. All the women were jealous.

Go Cougars! I love me some good BYU football! :)