Babies are so sweet... 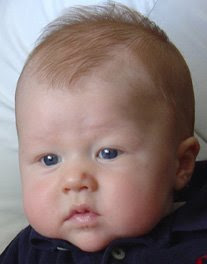 I know they can sometimes be a little bit crabby and I know they can sometimes drive parents a little crazy and I know that when they are close to the dreaded terrible twos that they are extremely unreasonable at times (kind of like the teen years I have observed), but something about them is just so endearing. It truly warms my heart when you catch the eye of a little boy or girl and get them to smile. It honestly melts my heart.
Last Sunday, I was sitting in front of this couple that I tend to end up sitting nearby a lot, and their little son Cameron, who just turned 1, was sitting there almost directly behind me. He has the cutest personality and once he knows I have noticed him, he makes little cooing and giggly sounds until I turn around to acknowledge him. He really is a cutie.
And then in Sunday School, I sat by this recently new mom with her 10 1/2 month old son named Jonah. They are only in our ward for a short time. I smiled at Jonah and at first he just stared with wide eyes at me with his binky suctioned into his mouth. (I don't think you could have pried that binky out of his mouth!) Then he just continued to stare at me. So I would look over at him and smile. He warmed up and started smiling back every time I looked in his direction. Just so cute. I guess he felt even more comfortable because as the class went along, I ONE TIME only just slightly tilted my head and smiled at him. From then on, when I would look over at him, he would tilt over so far that his head was almost pointing to the floor! It was pretty funny and I did apologize to the mother for her having to hang on to him as he turned upside down each time. Goodness. After a while he got tired of attempting his gymnastic moves...but it did make me smile.
Seriously- kids just have this way about them with their sweet little chubby cheeks and their ready smiles. Like my little nephew Wyatt from a year ago. Now he is a busy 2 year old (and by the way, he is a sweetheart...other than when my sister Karen sings to him, he says, "No!" A person could get a complex... ; ) Truly these little people our straight from Heaven! No question.
Posted by Lori at Tuesday, August 19, 2008

It sounds like you are a baby-magnet and the love for you to look at them and hold them. What do they say? . . . babies and animals can tell a good one when they see one? :-) So cute!