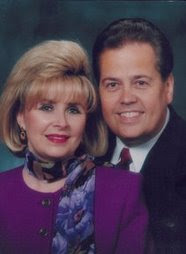 So when I was busy running to all corners of the temple last night, I happened to see Alan Osmond and his wife. He is the oldest of the performing Osmond brothers. I have never met him in person. In fact, I think I have only met Marie once. Just kind of fun to meet them in person.
Anyway I actually talked to them for a little bit and told them how amazing the Osmond/Motab concert was on July 26 up at the conference center. He thanked me very graciously. It was very fun to meet him. I also told him later (I saw them again) that Lisa is in my ward. So it was fun to have those subjects to talk about. I totally forgot to tell him that I also know John Whittaker. Lots of connections.
Just a nice man. And his wife is very sweet also. I kind of worry about him. He looked a little tired. But you can also tell he is a strong person. They both are. The Osmonds are a great example.
I was very impressed with how nice they were. The picture I have on here is from the year 2000.
Posted by Lori at Friday, August 15, 2008

How cool to run into them at the temple.

We'll have to play with your iPhone on Monday night before the concert.

oh that is right! you will be at the monday night concert! fun!

How fun to run into people at the temple!